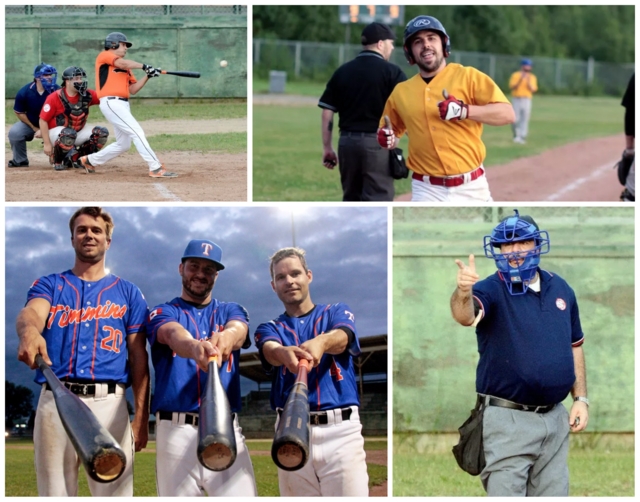 Welcome to the League Regulations page. The Timmins Men’s Baseball League follows, in principal, the Baseball Ontario rulebook. A custom set of rules and regulations have been assembled and prepared to primarily benefit teams and players that participate in our league, as well as prospective teams and players interested in joining the TMBL; for fans, sponsors and others interested in, and supportive of, the Timmins Men’s Baseball League. For a more in depth look at the TMBL's rules and regulations, please download a copy of the full document here.

The purpose of the Timmins Men's Baseball League (TMBL) is to promote and teach amateur baseball in the city with the heart of gold and surrounding areas. We provide maximum opportunity for individuals who wish to participate and develop community spirit, sportsmanship and fellowship amongst all participants. The TMBL encourages throughout Northern Ontario with the ultimate goal of achieving betterment and exposure for the sport. Since its inception in 1985 by baseball legend Gary Tonelli, the TMBL has strived to maintain its level of honesty, fair play and respect amongst its members. The TMBL is also a member of Baseball Ontario.

Below you will find a summary of essential league rules and regulations. For a full look at the Timmins Men's Baseball League's house rulebook (Baseball Ontario rules with revised house rules), please download a copy of it here.

Payment schedules and fees will be determined before every start of season. Research of other regional baseball leagues will continue to be looked at, to determine proper officiating fees for the TMBL. Below is this year's pay grade for umpires and scorekeepers:

Due to a late start to the season, there will be no rescheduling of games due to shortage of players. This will be an automatic forfeit. We must keep rescheduled days for any weather related issues only.

If a team cannot field enough players for a game and needs to cancel, the team representative must contact the opposing team, as well as the coordinator to let them know. Any game cancellation made will result in an automatic forfeit (7-0 loss) and a possible fine of $50.00 (depending on time of cancellation).

If you would like to switch practice days to make it more convenient for both teams, please arrange it with specified team representatives.

Each team has the ability to stock pile as many players as they need on their regular season roster. A player must have played a total of 1 regular season game to qualify for participation in the league playoffs. A game played will consist of a minimum 4 innings played.

A player acquired through a team’s own recruiting efforts shall be subject to the control of the team that made the effort to scout and recruit. If the recruited player has submitted a TMBL free agent player form, then he must be entered into the free agent pool and selected through the free agent process.

The president and or commissioner shall control the assignment to teams of all new players who have submitted a TMBL free agent player form. At the beginning of each season, all teams will be asked if they require any free agent players. All teams who agree to add free agent players to their respective team will have the opportunity to do so, through a cycled draft process; with the lowest ranked team of the previous season having the first pick. Here is the 2022 draft order:

Player transfers during the regular season must be approved by the president and or commissioner and all team representatives of the league. Player transfers are not permitted during playoffs and will result in automatic player suspension.

Standings shall be determined by winning percentage (games back). In the case of a tie between teams seeded 1st to 4th, the final seeding will be decided by head-to-head comparisons. In the event that the tie continues, the final determination will be the differential of total runs for and against for the season. If tiebreakers cannot determine seeding, a one-game playoff will be played. In the event that there is a tie between 4th and 5th place, a one-game playoff will be played to determine which team makes the playoffs.

The top 4 teams in the league shall qualify for postseason play with the team with best record being the first seed, and so on. Potential teams that are seeded in 5th or more, will be eliminated.

The starting time of weekday regular season games will be 7:30PM. Start times for Sunday make-up games will be 6PM or 7PM. Lineup cards need to be filled out and submitted to the plate umpire and scorekeeper 15 minutes before game time. Umpires will start the game regardless of circumstances, provided there are enough players to field a game from both teams.

Regular season and playoff games tied after 7 innings will continue. Subsequent innings that follow the 7th inning will utilize the International Softball Tiebreaker Rule, where each team will bat with a runner on second base (the last out of the previous inning). If the game must be stopped due to inclement weather or darkness, it will resume the next time both teams are matched up. There are no ties in baseball. The game will continue until there is a winner.

The TMBL allows a 20 minute grace period beyond the start time of a scheduled game. Should a team fail to field a set of players by the end of the grace period, then the game may be declared a forfeit. The game will be reported as a 7-0 score on the scoresheet.

Games that are stopped as a result of inclement weather or due to darkness will be considered official if the losing team has completed 5 innings at bat. Games called will be done so at the plate umpire’s discretion. Umpires are not required to discuss reasoning with teams.

Games called due to weather or any other circumstance that are fewer than 5 innings will be continued at a later date; preferably on the day where both teams are once again matched up. The continuation must be agreed to by both team representatives and league approval must take place. If the score differential of the game is by 7 or more runs, the game will be considered official and will not be continued at a later date.

Wood and composite wood bats that meet the specification of Baseball Ontario senior league baseball are permitted. All aluminum bats are strictly prohibited. Any use will result in immediate ejection.

No player while pitching may wear white, grey, or multi-coloured sleeves, nor may a pitcher wear a batting glove or wristband while pitching. Automatic intentional walks are now permitted. If a pitcher hits 3 batters in any one game, the pitcher must be removed on the third hit batsman. There is no regulation as to how many innings a pitcher may pitch in a game or week.

A team may bat as many players as they desire, with a minimum of 9 (subject to the number of players available). Batters cannot be deleted or skipped over, regardless of their batting position or when they were added during the game. If a team has only 8 players and therefore bats only 8, the opposing team will have the option of batting 8 as well. A team may not add batters to the bottom of the lineup unless they have 8 players on the field at any time. The team with 8 players will not be issued an automatic out for the 9th spot. A 9th player can be entered into the lineup at any time.

SUBSTITUTION FOR INJURY OR EJECTION

If a player is forced to leave a game due to injury or ejection, a reserve player, not previously entered into the game as a hitter, must hit in the replaced hitter’s batting order. If there are no reserves who can replace the individual, the spot is skipped and all hitters below that position move up.

An umpire has sole discretion to expel any player or manager from the game. Players or managers ejected from a game are subject to penalties including fines, suspensions and expulsion from the league. Each ejection shall be examined for its severity to determine appropriate sanctions, if any.

Base running collisions are strictly prohibited. Infractions will result in an automatic out and possible further disciplinary action.

Phantom tags are strictly prohibited. Infractions will be handled on a case by case basis by the plate umpire and are subject to further disciplinary action.